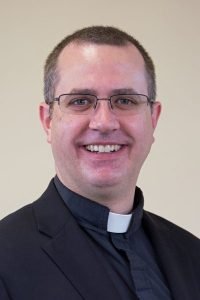 Fr. Mike was ordained a priest for the Archdiocese of Baltimore in 2007, most recently serving as pastor of Our Lady of Grace in Parkton, Maryland. Previously, Fr. Mike served as an associate pastor at Resurrection in Ellicott City and at Our Lady of Mount Carmel in Essex. For the past 10 years, he has served as associate, and then director, of Deacon Formation for the Archdiocese. He grew up in Reisterstown, as the perfect middle child (4th of 7). While his father Larry was on the other side of town (Hamilton), his mother Carol grew up at St. Mark’s in Catonsville, where his grandmother still lives, and graduated high school from Trinity. He attended Sacred Heart School in Glyndon and throughout high school could be found at the parish where he was active as an altar server, sacristan, phone receptionist, and peer leader in Youth Ministry. With the encouragement of his longtime pastor, Msgr. Aiken, Sr. Jude, and many other priests and seminarians, in senior year at Calvert Hall, he applied to the Vocations Office and was accepted into the College Candidate program for the Archdiocese, attending La Salle University. After college, he attended St. Mary’s Seminary & University in Roland Park before studying five years at the Pontifical North American College in Rome. After studies at the Pontifical Gregorian University, he earned a Licentiate in Sacred Theology, with a focus in Spiritual Theology, from the Teresianum University. Learn more. 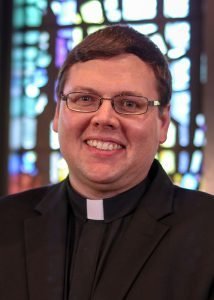 Father Rob Katafiasz (pronounced Cat-uh-FI-ez), a Pasadena MD native–followed a tech-prep track through Northeast High School, and then Anne Arundel Community College. Before seriously discerning the priesthood, he worked as an industrial cleaner for five years, which left him time for little else, with a work schedule that required him to be on call 24/7.  He would later become the maintenance man of his home parish, St. Jane Frances de Chantal in Pasadena, which afforded him more time to begin seriously exploring religious orders.